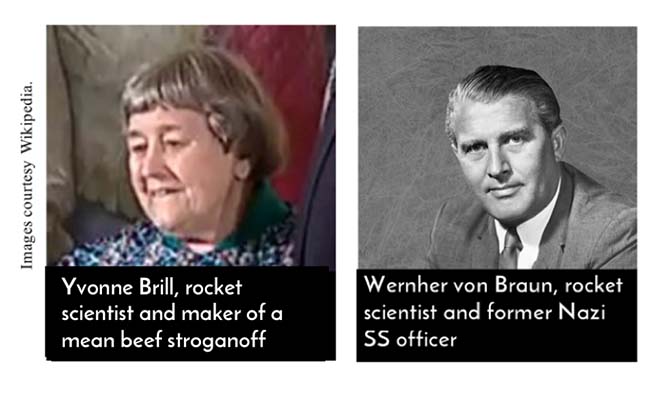 The 2013 New York Times obituary for Yvonne Brill, a rocket scientist, infamously opened with a description of her her housewifely charms: ”She made a mean beef stroganoff, followed her husband from job to job and took eight years off from work to raise three children.” This choice of words was so unfortunate that similar condescension came to be known among writers as “getting stroganoffed.” In response to charges of sexism, the obit’s introduction was stealth edited.

If you doubt there was bias at play here, compare Brill’s obit with that of Wernher von Braun, also a rocket scientist. Herr Dr. von Braun is described in the first sentence of his New York Times obituary as a “master rocket builder and pioneer of space travel.”

Astonishingly, the fact that he was also “the chief designer of Hitler’s V-2 rocket”—in other words, a Nazi SS officer who hobnobbed with the likes of Albert Speer, Heinrich Himmler, and Hermann Göring—isn’t mentioned until the 28th paragraph of Braun’s lengthy and respectful send-off. The “soup Nazi” jokes write themselves.

An obituary doesn’t have to tell the full, unvarnished truth, and it’s usually a bad idea to turn someone else’s obituary into a diatribe. But modern obituaries do strive to recall every aspect of a person’s life, for better or for worse. Here’s how I explain it in How to Write an Online Obituary:

Today’s obituary makes “a fresh set of calculations about what an exemplary or memorable life is,” says historian Bridget Fowler. Miscalculations, blunders, and gaffes are part of the package. We no longer buff out all those flaws with a shiny coat of Turtle Wax. Instead, we showcase an obituee’s individuality, recall his accomplishments, and capture the moment in which he lived.

But being one of Hitler’s adjutants is not just an oopsie! or a momentary lapse in judgment. According to his biographer, Wernher von Braun recruited slave labor from concentration camps. He watched as these men toiled to build the colossal underground manufacturing facilities needed for his brilliant new weapon. These men were forced to work barefoot, in cavelike conditions, wearing only filthy rags, sleeping on the ground, eating almost nothing and drinking from mudpuddles that formed as they tunneled beneath the earth. Oh, but Herr von Braun came over to our side later, and he was a master engineer. Somehow that excuses his little transgressions.

The moral of the story? If you facilitate crimes against humanity, being a genius will make the world forget about your bankrupt soul. But if you make a divine beef stroganoff, the world will forget you were a genius.