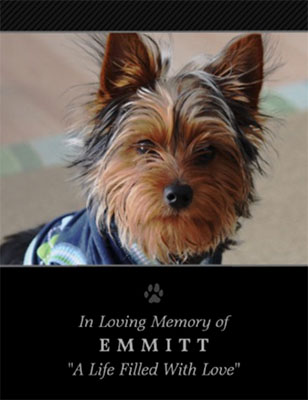 The seriousness with which we Americans now approach our pets’ passing shows how far we’ve moved away from our formerly god-fearing attitude toward the afterlife. Today, pet sympathy cards have come to seem normal. Think about that. (Full disclosure: I haven’t had a pet since my cat, Curtis, died 15 years ago. But back then, I was just as smitten as the rest of you.)

Mary Wickison, of Pethelpful, recommends that her readers buy sympathy cards for fellow pet parents “as soon as you know the pet is ill.” That gives you time to order a card from Zazzle, she says, with the pet’s name and picture on it. (Download Muffie’s photo from the pet owner’s Facebook page or other social media account, or take a screenshot of the image.) Wickison offers sample pet condolences you can handwrite inside the card, such as “[Insert pet’s name here] was such a wonderful [cat/dog/bird]. He was lucky to have found a loving family such as yours.”

Many virtual memorial sites feature a “PETS” tab, so you can post a heartfelt obituary for little Farrah Pawcett or Isaac Mewton on the same site where you posted your granddad’s obituary. It makes no difference to the dead guy, I suppose. But there’s something unsettling about placing your grandfather’s send-off next to someone else’s heartfelt ode to a cocker spaniel.