Should Registered Organ Donors Be First in Line? 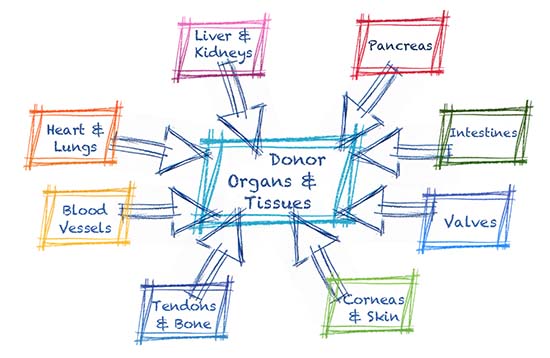 If your loved one became an organ donor, you must decide whether to mention that fact in his or her obituary. According to the American Medical Association, two people die every day in the United States waiting for organs. The need to obtain explicit consent from organ donors is at the root of this shortage. Since they must also be dead in order to donate—well, you can see the problem.

In this country we have an opt-in system in which one’s wish to become an organ donor must be recorded in a state donor registry. If it’s not official and the would-be donor can’t speak for himself, he won’t be allowed to donate. In European Union countries, such as Germany and the U.K., an opt-out model is followed—that is, it’s assumed that you wish to donate your organs unless you’ve indicated otherwise in writing.

A lot of minds must be changed before Americans begin to regard organ donation as a duty of citizenship, as it’s viewed in Israel. There, registered donors are given priority as recipients. It’ll take time to reach that tipping point, but the more dialogue we have about organ donation, the faster we’ll get there.

An obituary that’s read by thousands of people can spark these kinds of conversations. You’ll probably never know it, but the obit you write for your loved one may save someone else’s life.

Talk about karma…that’s some good juju right there. But it can happen only if you disclose the obituee’s organ donation. A simple statement like this one is all that’s necessary: “In keeping with her generous and caring spirit, Terrie [59-year-old Maria Teresa Ajamil] made the decision to donate her organs and tissues so that others may live.” If you can, place the statement at the beginning of the obituary, like this:

Everyone who lands on Ms. Weakley’s obituary page will learn of her gift—not just those who click the “Read more” link.