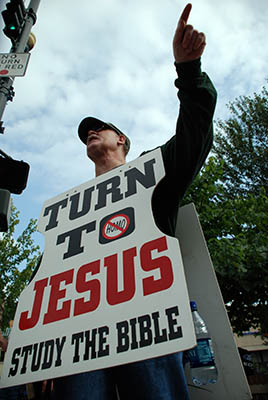 An obituary shouldn’t be a platform for the obituarist’s own hatred, shame, or guilt. In an obituary for his grandmother, Joshua Fischer denounces our “selfish desires” and deplores our “lying, stealing, cheating, taking of innocent life, adultery, fornication, homosexuality, whatever it is…”* Dang, that’s quite a list. If that’s what Mr. Fischer’s grandmother believed—as he claims—then frankly, we’re well rid of her. But I’m not going to take his word for it.

“There is not a person alive on this earth who can deny this stain,” says Mr. Fischer. Well, speak for yourself. Don’t get me wrong. I’ve lied, cheated, and had some really mind-blowing sex, but I don’t consider those acts to be stains—more like not-to-be-missed adventures in being human.

Mr. Fischer, writing from Afghanistan, was understandably troubled that he couldn’t be “there by [his grandmother’s] side” when she died. The first 600 words of his tribute are lovely. “[I]t was one of my greatest joys,” he says, “to spend nearly everyday with her eating breakfast after college classes, and even skipping once or twice…” Mr. Fischer remembers that his grandmother “would, despite the obvious fatigue it caused her to be out late, drive me and buddies of mine over an hour away just to go to a skatepark.” He remembers “[g]oing to bingo…and grocery shopping [and] playing 10,000 Skipbo Uno.” But he uses the last 400 words of the piece to berate us sinners for “seeking only the pleasures of this moment.” We should instead, he says, strive to be Christians “reconciled to right relationship with God.”

Mr. Fischer wrote this obit in the throes of grief from 7,000 miles away. Presumably he had no family nearby to comfort him. Plus, it really sucks to lose your grandma under any circumstances. So I’m gonna give the guy a pass. But next time you need to write an obit, do it in your own good time. Obituaries written in haste tend to be sappy or generic or harsh. Remember, newspaper copy deadlines are irrelevant. Online obituaries can be posted weeks or months after the fact. The fraught tribute Mr. Fischer produced for his grandmother shows why, at least sometimes, they should be.

*I don’t mean to pick on Mr. Fischer. He wrote this obituary several years ago, and perhaps he sees things differently now. But the piece is a good example of the volatile brew of emotions that bubbles up when a grieving person rushes to write a loved one’s send-off.